When a group of birdwatchers finds an interesting bird, invariably they’ll gather around and look at the bird for as long as the bird complies. Sometimes this can go on for quite a while, especially if the bird is difficult to identify, is uncommon or is doing something unusual.

Once I have identified the bird, I then practice a strategy I call ‘orthogonal birding’. I just turn to the left and look for any new birds. I then repeat this action two more times. More often than not, this method of looking where no one else is looking can yield new and more interesting birds such as Clay-colored Thrush, Spruce Grouse and Black-headed Gull.

This is somewhat similar to the Patagonia Rest Stop Effect.

I’ve also found this to be a useful strategy for product development. Many times we can get distracted by the latest and greatest. This isn’t necessarily bad, but it also helps to consider features or content that no one else is considering at the moment.

I’ve been taking time to watch organizational dynamics in unconventional populations to learn more about group dynamics in the work place.

Yesterday, I led a bird identification field trip with Mr. Hannah’s 5th grade class at Alki Elementary school.  We saw over 10 species including an Osprey and a Bald Eagle.

Here are some things that happened and the consequent lessons learned:

Lesson: It’s okay to change procedure if it does not have that much of an effect on what needs to be done.  Sometimes we can get hung up on procedure or methodologies, but it’s all smoke without substance.

Instead of telling the students what they’ll see and how exciting birdwatching is, I just proceeded into a description of what they needed to know: how to use the resources they had available.

Lesson: Cut to the chase, give people the tools and they’ll usually figure it out.  Most of the time, a leader’s role is to provide assistance, guidance and minor adjustments here and there.

One of the students would tend to wander off from the group.  Saying his name in a clear and direct voice brought him back to the group.

Lesson: The sound of a person’s name is a powerful attention getter.

Throughout our trip, numerous birds were spotted.  After watching and identifying the bird, I would ask who had found it and give them credit for getting us on the bird.  Surprisingly, the group was very generous in giving credit and no one ever squabbled about who saw the bird first.

Lesson: Take the time to give credit.  Trust the group to identify those who make significant contributions.

Sometimes the girl who was tallying our totals would hit a boy with the clipboard for no apparent reason … well, except for being a 5th grader.  The boy would protest, but seeing no gaping wound or blood, I told him to look for more birds and the girl to focus on keeping the tally.

Lesson: Don’t give petty disputes too much attention.  Keep the combatants focussed on the work at hand.

We saw another birding group under a tree who seemed to have spotted something interesting.  We went to their tree and discovered a crow on a nest.

Lesson: It’s OK to see what your competition is doing.

Several times, the children would report the observation of squirrels, small children, defecating dogs or creepy school visitors.  Instead of chastising them or telling them not to look, I explained that those were all uninteresting as they were mammals and not birds.  I asked them to instead find a creepy or defecating bird.

I took advantage of the good weather to take a look at the Black-tailed Gull that had been seen in Tacoma.  This is a very rare bird and is usually found on the other side of the Pacific.

A gaggle of birders with scopes marked the best vantage point along Marine View drive to spot the gull.  Unfortunately the sun was shining right on the log boom where the gull roosted along with a couple hundred other gulls.

My birding partner, Tina, set up her scope and quickly found the bird.  It was clearly an adult gull and had a black tail with just a smidgeon of white at the edge.  The gonydeal angle was fairly straight.  All characteristics of this gull.

Later we showed the bird to a man from Vancouver who knew the bird very well from living in Asia.  As the bird flew off into the sun, he confirmed our find.

I did a life bird happy dance!

I found some time in the morning to do a quick hike to a popular trail in the Issaquah Alps.  There were a lot of families and youngsters about – glad to see them start young.

The trail was short (1.8 miles) with a 200 foot gain and I was surprised how quickly I completed it.  My pace was about 3.8 miles/hour.

Not many wildflowers but there were a lot of Pacific Slope Flycatchers calling. 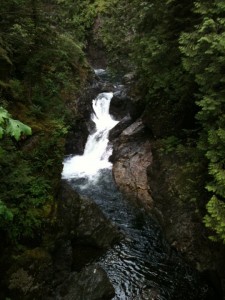 I made my 2nd hike of the season to Twin Falls outside of Northbend. The trail is very well maintained, 2.25 miles roundtrip with an elevation gain of 500.  It took me about an hour to hike.

The trail was very green and lush with the forbidding oploplanax horridus loitering near the trail.  The wildflowers were few (dicentra formosa, geum macrophyllum) and the salmon berries were still not ripe despite the salmon berry bird (Swainson’s Thrush) singing all over the place.

A Dipper perched on one of the rocky outcrops of the falls and a Hairy Woodpecker played ‘peek-a-boo’ with me as I descended from the falls.