I’m doing some revisions to an older title and came across these gems embedded in a system file.

We used to collect funny quotes that would invariably occur during long hours of production.  Here are some of the better ones:

Karen: Why do you smell like lighter fluid?
Donovan: I have a Zippo in my pocket.

So we’re getting a better squish? – Karen on our new codec

The only free cheese you get is in a mouse trap. – Alena bestowing Russian wisdom

I’m finger-oriented. – Karen explaining the smudges on her monitor

Take that out of your mouth, son. It’s not real. – Wayne’s fatherly advice

That’s a lot of mustard. - Jan misinterpreting a carafe of orange juice

But… you shouldn’t have changed my body. - Robert exerting too much ownership over an animation

I like a chair that’s already formed to my butt. - Kyle

Our publisher back in 2001 was interested in continuing Message in a Haunted Mansion‘s success by porting it to Game Boy Advance.  We contracted the development to a 3rd party and I managed the project.

It was my first time working with a 3rd party developer except for animation, music and testing.

I really wanted to redesign the game, especially to fix issues we learned after the game’s release but more importantly to design for the platform.  But we decided instead to do a straight port.

Nintendo was interested in the project and we got to go over to their offices a couple of times.  They had whiteboards that would print what was written on them!

While the product was very different than any other in the market and we got a good review from Nintendo Power, it never really took off.

Ultimately, I think it’s very difficult for a 3rd party developer to succeed in the console space.  Console purchases can be trendy and if support is dropped by retailers, the audience or the platform maker then you’re stuck with inventory that’s difficult to move.

Flush with the success of Message in a Haunted Mansion we were able to hire an actual writer, Erin Brown, for Nancy’s 4th interactive mystery, Treasure in the Royal Tower.  Erin was great to have on the design team and she prefaced each idea with “Maybe, maybe, maybe….”

Erin hated slider puzzles and had a great idea for how to deal with them: “Maybe, maybe – maybe we could like put a giant anvil hanging over a slider puzzle and you could just break the chain to smash it?”

Erin also had an odd fascination with food reflected in the strange menu of Wickford Castle.

The idea of a castle made up of parts from historic castles was Inspired by a visit to the Winchester House that the then Art Director, Laura Henion, and I visited when we attended the Game Developer’s Conference in San Jose.

It was great fun collaborating with Erin on Treasure.  It was especially fun creating the ‘puzzlemeister’ character of Ezra Wickford, inventor of chocolate milk and regretful disciplinarian.  And who couldn’t love the creator of the wildly popular Koko Kringle  chocolate bars?

I think that the direction for Nancy’s uncovering Ezra’s secret room is one of the best in the series: the soft, wistful musical theme, the lighting of the candle to illuminate his joys and sorrows and the gradual melting of the wax to reveal his key.  It was poetry to my eyes and ears!

Despite the difficult theme of Ezra and his regrets, we still kept it light especially with the zany character of Professor Hotchkiss played perfectly by Keri Healey.  I remember struggling to script her eye blinks as she talked to Nancy behind the door.  We were limited to 5 minutes of lip synching per character and had to use this device to stay within budget.

We joked about having the characters in the next game wear paper bags. 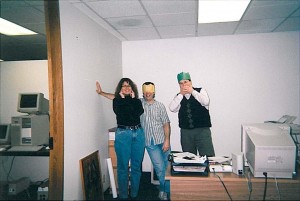 Even though Secrets Can Kill ended with a teaser for an investigation of death threats on the set of Detective Beach, we decided to have the 2nd Nancy Drew game take place on the set of a soap opera.  We also set it in New York to explain why Nancy’s Aunt Eloise was in Florida and no longer New York city.

It was during the design of the game that I came up with the character of the puzzlemeister or the source of the puzzles that the player encounters in an adventure game.  So often puzzles are thrown into a game without thought about its origin which can break suspension of belief.  This was particularly odd in Secrets Can Kill with the omniscient riddles strewn about the bulletin boards.  Puzzles should be organic to the narrative and flow naturally within the context of the plot, location and/or character.

Our production crew was bare bones and in addition to managing accounting, scheduling, design and scripting I also wrote the conversation script.  While I still cringe at hearing how wordy some of the conversations were, I still laugh at some of the silly lines, especially smarmy Rick Arlen telling Nancy to Stay beautiful.

One innovation that I was excited to develop with our lead programmer, Wayne Sikes, was the cel animation library.  We devised a system whereby the animators created a library of head movements and body movements that could be reused to create an animation.  This enabled us to reduce the footprint of the game install and keep the game on 1 CD-ROM.

The image is an overhead map of Dwayne’s office which I scripted.  The numbers are scene numbers that refer to a specific script file. 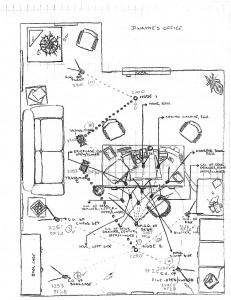